Besides a whole pancreas transplant (which has a high mortality rate), currently the only cure for diabetes is islet cell transplantation. It’s a procedure available to patients with complicated type 1 diabetes.

Although hundreds of patients have successfully received donor islet cells, the rates of cell survival and effective transplantation would be vastly improved if more cells survived the initial removal and transport phases. Our technology addresses this issue.

In a patient suffering from type 1 diabetes, the pancreas is not able to produce insulin, the hormone responsible for glucose metabolism. As a result, these patients need to constantly monitor their blood glucose levels, and adjust these with insulin injections throughout the day.

Instability in blood glucose levels has significant implications for the patient’s health in the long term, mainly due to changes in very small blood vessels that lead to diseases of the eye, kidney, nerves and cardiovascular system. 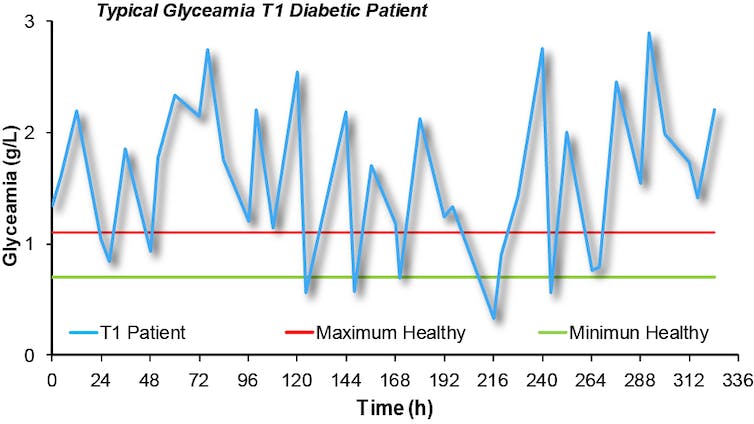 Normally, insulin is produced by β-cells (pronounced as “beta cells”). β-cells exist in the pancreas in a packed group of cells called the “islets of Langerhans”, or islets for short. Along with the β-cells, other cells within the islet also produce unique and specific hormones. Together these cells act to regulate blood glucose levels.

The idea of transplanting healthy islets to diabetic patients became a reality in the late 1980s, when Dr Camilo Ricordi devised a workable method for isolating the required amounts of these cells. Now with improvements in anti-rejection drug therapy, islet transplantation is used to treat type 1 diabetes: hundreds of patients worldwide have received a transplant. 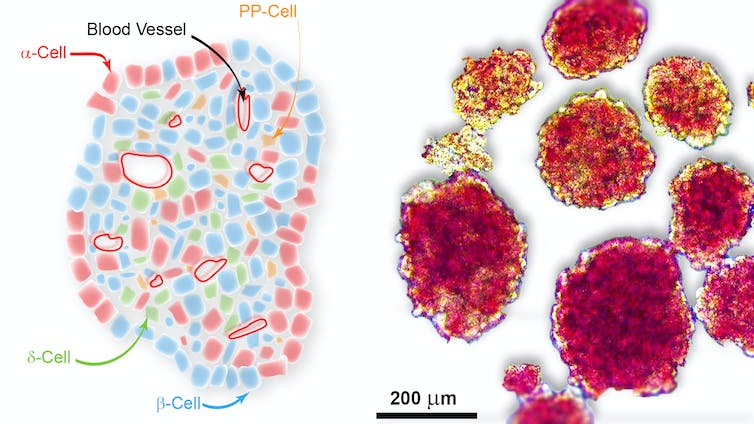 A drawing of the five different cells that make up an islet in the pancreas, including β-cells in blue, shown next to a microscopic image of isolated human islets (stained with the dye dithizione). A. Forget & D. Rojas-Canales

Islet transplantation requires a single keyhole surgery to precisely position the islets within the patient’s abdomen, and a quick recovery usually follows.

Like any transplantation, islet transplantation is hamstrung by the small number of organ donors and an increasing population suffering from diabetes (worldwide over 425 million people).

But there’s another limiting factor – once separated from the pancreas, islets are extremely fragile and up to 35% will perish before being transplanted.

Improving the survival of islets pre-transplantation is expected to dramatically improve the availability and clinical outcomes for patients.

If more islets could be preserved pre-transplantation, patients would in most cases require only one transplant, when today multiple organ donors and transplants are needed to treat one diabetic patient.

The number of transplants varies year to year due to the number of donors (deceased people who have agreed to organ donation), and the immunological matching of the donors to the patients. 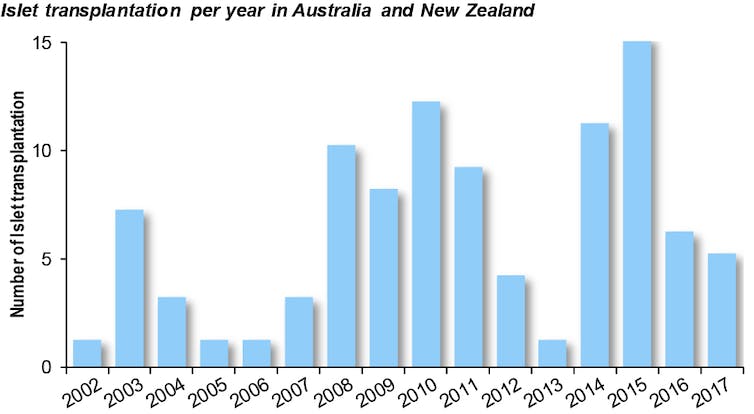 Number of islet transplants in the last 15 years in Australia and New Zealand. Data from Australia New Zealand Islet and Pancreatic Transplant Registry

When a pancreas is collected from a donor, a specific procedure is required to extract the islets located within the pancreas. This isolation can only be performed in a sterile facility (protected from contamination) equipped with precision equipment.

In Australia, like in other countries, the isolation is centralised in Melbourne and Sydney and the islets are then shipped to the different transplantation centres. But because islets are composed of cells with a very high rate of metabolism, they need a lot of nutrients and oxygen. Without these, the cells won’t generate insulin and the other hormones used in the regulation of blood glucose levels.

Once disconnected from the blood vessels in the host person, islets quickly begin to starve and asphyxiate, both of which lower chances of cell survival.

Many laboratories around the world are trying to extend the shelf-life of islets. The team have developed two brand new technologies to address the causes of islet death during transport – provision of oxygen, and protection from physical damage.

The first development is an inexpensive coating that releases oxygen once in contact with the islets. Researchers have shown the coating can provide enough oxygen for animal β-cells to survive in a low-oxygen environment (as is encountered during transport). They are hoping to soon translate this technology for human cell conservation and transport.

But this is not the only challenge: the movement of islets during transport can also cause damage. Currently, islets are transported in bags where the islets are freely floating in a solution composed of the required cell nutrients. As the bags move, islets are shaken and bounce onto each other. These interactions can destroy the islets.

After trying different biomaterials and testing several packaging shapes, researchers developed an egg-carton-like packaging. This segregates the spherical islets from each other, and maintains their viability during transport.

The lead image shows an overlay of two images obtained using fluorescent and scanning electron microscopy. Sitting within the wells of the “egg carton” are the bright green-stained islet cells.

Hope for the future

This technology has been used to successfully transport animal and human islet cells between Melbourne and Adelaide by plane, which took on average six hours from door to door. The egg-carton package improved islet survival.

Translating this technology to the clinic will hopefully improve islet survival during shipping, and give access to islet transplantation to a larger population. This technology needs now to be scaled up to accommodate the 500,000 islets required to cure a patient.

In the words of collaborator Bernie Tuch at the University of Sydney: Advanced medical devices made of biocompatible materials which could protect the islets after implantation could further improve the transplantation procedure and allow more patients to benefit from this treatment

This article was originally published on The Conversation.

Diabetes increases the risk of falls

Ears could help with type 2 diagnosis

Join our community of over 45,000 people living with diabetes